Skip to content
Advertisements
A global recall of fire-prone Galaxy Note 7 smartphones did not appear to hurt U.S. consumers’ willingness to buy Samsung Electronics (005930.KS) phones. Here’s why we say so.

SEE ALSO: Samsung finally stops Galaxy Note 7 Production
Despite all the explosion reports that rocked the arrival of the Galaxy Note 7 that was released some time ago, A Reuters/Ipsos opinion poll released on Sunday still showed that U.S. consumers still remain loyal to the brand.
The survey conducted Oct. 26 to Nov. 9 found that current Samsung smartphone users were as loyal to their brand as Apple Inc (Reuters AAPL.O) iPhone customers. It also found that people who knew about the recall were as interested in Samsung phones as those who did not. 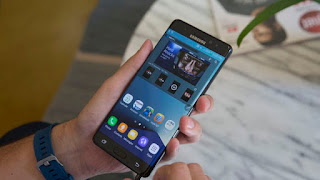 Samsung was plunged into a global scandal after Note 7 phones caught fire this year, prompting a worldwide recall. Some customers reported fixed phones overheated, leading Samsung to take back replacements as well. Investors expected Samsung customers would turn to alternatives, chiefly Apple’s iPhone 7.
Among those aware of the recall, 27 percent would first consider a Samsung smartphone if they were to shop for a phone, the poll showed. Among those who did not know about the recall, 25 percent would look first at a Samsung device.
The poll found that Samsung’s customers were fiercely loyal to their brand. Some 91 percent of current Samsung users would likely purchase another Samsung smartphone, and 92 percent of current users would probably buy another Samsung product in general.
That was similar to the brand loyalty among current iPhone owners: 92 percent would likely buy another iPhone and 89 percent would likely buy another Apple product.
To be sure, it was unclear how much the Samsung recall weighed on the minds of consumers. The Reuters/Ipsos poll measured how interested people were in buying Samsung phones, not how much the recall directly influenced their decisions.
Jan Dawson of Jackdaw Research said the recall was mostly limited to early adopters rather than the majority of Samsung’s customer base, which limited negative user experiences.
“Your own personal experience trumps what you read and what people tell you,” Dawson said.
Samsung has said that customers chose another Samsung model as a replacement for the Note 7 in a majority of instances, without giving more detail.
It has said nearly 85 percent of the recalled Note 7 devices had been replaced or returned through its refund and exchange program as of Nov. 4.
In a statement it said it was now focused on “ensuring customer safety and understanding the root cause of the issue.”
The Reuters/Ipsos poll was conducted online in English in all 50 states. It included 2,375 people who own Samsung phones and 3,158 people who own iPhones.
The poll has a credibility interval, a measure of accuracy, of 2 percentage points.
Got anything to add to this post? Tell us via comments
Advertisements