Skip to content
Advertisements
The results are out and Apple is back on top. According to a new report by research firm Strategy Analytics, the Apple sold more smartphones than any other company in the Q4 – fourth quarter of 2016, including its biggest rival in the competition, Samsung.
MUST READ: Apple may start manufacturing iPhones in India this 2017
In the report, Apple was reported selling 78.3 million iPhones in the last quarter of 2016, whereas Samsung sold “just” 77.5 million phones. (Different companies use different financial calendars, which is why Apple considers the same period the first quarter of 2017.) 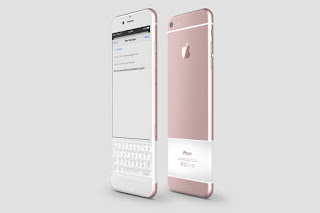 Possible Reasons
The reasons for this result could be analyzed in two ways: Apple had an amazing quarter, and Samsung’s quarter was terrible as the company had to discontinue its flagship phone – Galaxy Note 7, the Galaxy Note7, following numerous reports of its battery overheating and bursting into flames.
On a yearly basis, Samsung still leads by a large margin, having sold a total of 309.4 million phones in 2016, compared to Apple’s 215.4 million units sold. Of course, Samsung sells many more smartphone models than Apple, and many different price points, while Apple sells just three different variants of the iPhone (along with some older models), and all are considered “high end” phones.
Other rivals to look out for
Third on the list was Huawei, which also had a great quarter, followed by Oppo and Vivo. See screenshot of the Full report below 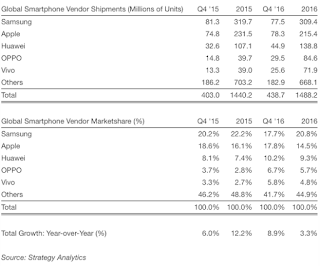 In terms of market share, if we only look at the last quarter of 2016, Apple is once again on top, with 17.8%, followed by Samsung with 17.8% and Huawei with 10.2%. On a yearly basis, Samsung is in the first place with 20.8%, followed by Apple with 14.5% and Huawei with 9.3%. Oppo and Vivo round up the list with 5.7% and 4.8%, respectively, while all other vendors accounted for 44.9% of the market.
Samsung’s phone sales are likely to improve after the company launches its new flagship, the Galaxy S8. That’ll happen later than anticipated, though, as Samsung recently said it would not launch the phone at the Mobile World Congress in February.
What do you think about this report? Tell us your opinions via comments.
Advertisements