For the generations that are practically born with a smartphone in their hands, getting the hang of each new app update or phone upgrade is relatively easy. The same could be said if you got introduced to Android apps and smartphones in your prime learning and adaptation age.

Most digital products feel like a second skin, especially intuitive apps and novel smartphone accessories. We must admit, though, that in the pursuit to amp up Android app development, we forget that not everyone can keep up with the requirements of the modern hi-tech equipment. 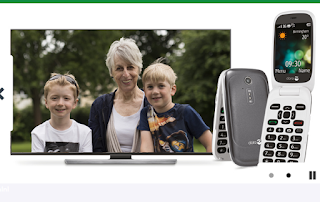 Older generations, for example, face their own challenges. Doro is made exactly for those people. It comes with a matching Android app that supports a TeamViewer feature.

Doro helps seniors feel connected without the pressure to follow latest trends for smartphones and Android apps, feeling pushed to stay in the loop. It looks that a team of socially-conscious app developers has come to the grip with the situation that progress sometimes assumes excluding vulnerable categories. And with Doro, something had been done about that.

This is an excellent way to put Android’s open platform in use for a purpose that goes beyond and above mainstream customer targets, providing benefits to senior customers and catering to their distinct set of needs.

How does Doro make this possible? First of all, the remote control option provides coaching from the ‘My Doro Manager’ feature, which lets not only Doro user support, but also friends or relatives take over the control and fix what’s wrong or adjust the settings without even being there.

At least one thing has been made easy for less confident smartphone users, but that is not all – you can also remotely push snaps to be visible in gallery view whenever the phone is placed in the charging dock. Unless the user charges the phone at a public place, this is obviously an improved way to keep the benefits of ‘wallet photos’ at hand while avoiding oversharing with anyone that gets to see the wallet open.

The second best thing about the Doro smartphone is not an Android perk, but it’s definitely a socially conscious move helping senior citizens with less than perfect health. The large, simple and clear icons keep it easy for users with imperfect acuity and the hearing aid adjustment helps those with impaired hearing.

The phone is designed with big buttons for convenient functions which are used frequently, such as messages and contacts. At the same time, it avoids the touch alternative for the most used buttons, such as ‘Options’, ‘Home’ and ‘Back’: a step back that means a step forward for those who need better physical limits for a button.

The next big thing in Doro Android app development is the Doro Keyboard (currently unreleased) – an ergonomic keyboard with generously spaced buttons and intuitive text prediction, as well as voice input. And yes – there is a mini version, the Doro Liberto 820 Mini, a pocket-friendly version of the smartphone that comes with identical support capacity.

Simplicity is the key to Doro. That doesn’t mean that users lose on other smartphone advantages, such as a reasonable 5-megapixel camera solution and a 1500 mAh Li-ion battery.

Despite the critique that many Android apps have suffered due to the expanding mobile culture, no one can deny that they carry a vast potential for solving socially pressing issues, and Doro is just a small patch in the large scheme of socially-conscious things.